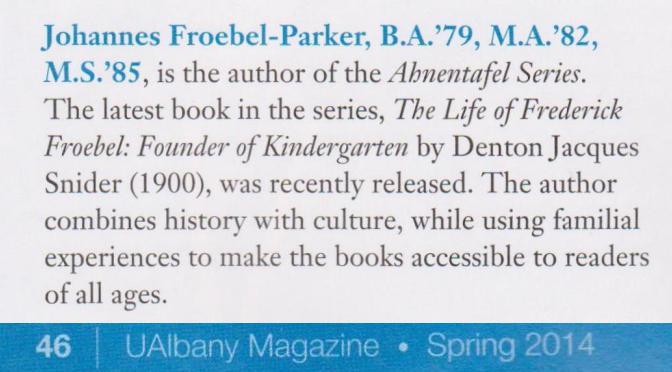 Johannes Froebel Parker is a New York State certified teacher with a long career, teaching English as a Second Language.

When I was a child, Lina Froebel sang to me in German, and told stories from her native Thuringia about my ancestors.

This inspired me to study at the Julius Maximilians Universitaet in Wuerzburg and visit the places remembered by my great grandmother.

Later, when I taught English as a Foreign Language at Marie Curie Oberschule in Berlin, I was able to make frequent visits to Thuringia and the places where Friedrich Froebel lived and created the first kindergarten.

These experiences inspired me to create a picture book for children about the first kindergarten with text in English, German and Spanish.

My mother and I traveled to the Froebel birthplace of Oberweissbach in 2013 for the start of the Froebel Decade. This visit inspired me to annotate a classic reference work about Friedrich Froebel with notes, illustrations, and information gleaned from my visits to Thuringia and genealogical research.

J. (Johannes) Froebel-Parker was born in Marathon, N.Y., near the hamlet of Lapeer, N.Y., where his Parker ancestors from Rhode Island had received Revolutionary War land grants in the late 18th century. During high school he attended Colegio Marista in Santa Cruz, Bolivia as a Rotary Club Exchange Student and returned home to graduate as valedictorian from Marathon Central School in 1975. During his undergraduate work at the University at Albany he studied as part of a university exchange at the Julius-Maximilians Universitaet in Wuerzburg, Germany. He earned an M.A. in German literature and language at the University at Albany after which he taught English as a Foreign Language at the Marie-Curie Oberschule in Charlottenburg, Berlin. In 1985 he completed an M.S. in education at Albany and taught English as a Second Language in a local public school for nearly 30 years. He has been director of Froebel Gallery, Ltd. since 1991.